A reader writes: "Is everyone as confused as I am?Is it true that Ontario is doing better than the 'rest of Canada' since 2005? Emissions down 22%?"

Thank you so much for asking. Ontario is a big emitter, and has done one important thing right. We have a long way to go.

2005 is a convenient baseline for this claim, because Ontario's climate pollution was its very worst in 2005. Strong action by the Liberal government (including many policies that the current government has cancelled) did bring it down by 22%, while emissions grew substantially in Alberta.

Why?Ontario emissions are down primarily because the Liberal government closed the coal -fired power plants. The first one closed in 2005, the last one closed in 2014. The largest reason was to improve air quality, which the coal plants were making filthy. 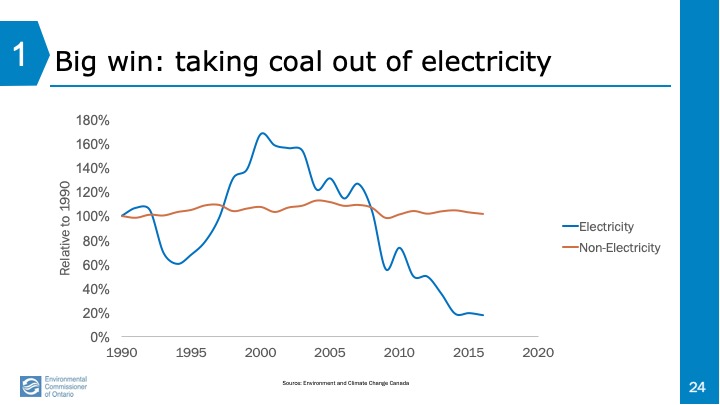 Air quality was so bad that all three parties promised to close the coal plants during the 2003 election. Do you remember when it looked like this? I do. It was brutally hard for those with asthma, like my late husband.

It was the Liberals who did the work and paid the price. Closing the coal plants, reinvesting in nuclear and adding renewables increased electricity prices. (Details in my electricity report.) Coal looked cheap on the electricity bill, because the bill didn’t count the air, climate and water pollution and health and infrastructure damage that coal caused.

Half the provinces of Canada have reduced their emissions since 2005. Alberta emissions are up because of increased production of oil from the oil sands, which have provided substantial fuel and funds to the rest of the country. Alberta and Ontario are the two provinces in Canada with the largest GHG emissions.

Alberta is already phasing down its coal plants, and pledged to close them all by 2030. Other provinces, such as Quebec, BC and Manitoba, already had much cleaner electricity than Ontario; they can't close coal plants because they didn't have any.

Other than coal, every other fossil fuel used in Ontario is up since 2007, when the ECO began keeping track. Industry and electricity were the only sectors that saw emission reductions.

Closing the coal plants was important, but we can't stop now. Ontario's are  huge wasters of fossil fuels with enormous carbon footprints, which we must dramatically reduce. For example, we drive the world’s least efficient, most climate-polluting vehicles:

Canada's current Paris commitment is much too weak, and must be strengthened, but Canada cannot meet even that commitment if Ontario sits on its hands and refuses to do more. Most other provinces have tiny emissions - who do the PC's propose should make up the 28 Mt emission reduction commitment that Ontario walked away from last year? The PCs never say.

Dear friends, Ambassador Rosemary McCarney and I are continuing our climate action series at Massey College. If you haven't heard it yet, don't miss the discussion of human and planetary health that took place September 23rd. The next scintillating conversation...

Electric vehicle charging takes off in the Bruce Peninsula

More evidence that Alberta’s oil industry is not “ethical”

Alberta claims to have an ethical oil industry. An ethical industry would pay its way and clean up its own mess. This is called the Polluter Pay principle and it’s fundamental to Canadian environmental law. Unfortunately, that’s not what’s happening...

"Gradually, then suddenly". After many years of hard work, climate litigation is racking up unprecedented victories around the world. Both companies (Shell) and governments (Belgium, France, Germany, etc.) have been found to be negligent and in breach of human rights...

I was delighted to listen to the most recent episode of the Indigenous Climate Action pod, called "In the Know - Respect the Moose". This episode focusses on the animals' long-term relationship with indigenous peoples across Canada, and how that...